I’ve written a number of articles about the pros and cons of frequent small meals as compared to the 3 meal a day or less plan.

Hypoglycemia and the Myth of Eating Frequent Small Meals  was recently published on the Vegetarian Health Institute Blog.

Every time I publish an article like The Great Meal Timing Debate! or Why Eating Small , Frequent Meals May be Damaging to Your Health there are many objections made by well meaning people who haven’t studied the science.  They are going by popular press recommendations to eat frequently to avoid blood sugar swings.

The purpose of today’s article is to share the science behind the recommendation to eat less frequently.  I explore the biochemical pathways that regulate blood sugar balance and the dance of the hormones that keep things in check.

Insulin is a hormone secreted by your pancreas in response to eating. It doesn’t much matter what you eat; insulin will be secreted. The composition of your meal determines just how much insulin is secreted. The more carbohydrates in the meal, the more insulin that’s required to keep your blood sugar regulated.

Here’s what supposed to happen, in a perfectly balanced body: 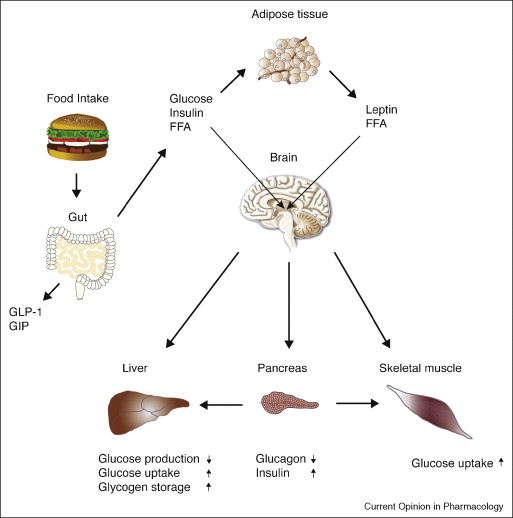 Typically, insulin levels peak at around 30 minutes after you eat and return to normal at about 3 hours. Then leptin gets to go to work and triggers fat burning.

In the ideal situation, insulin sends 60% of the fuel in a meal to the liver for “quick access” storage as glycogen and triggers the uptake of the remaining 40% of the glucose and amino acids into muscle cells and cells of your vital organs, which use the glucose for fuel and the amino acids for growth and repair.

The hormone glucagon is in charge of keeping your blood sugar steady between meals. Glucagon signals the liver to turn stored glycogen back into glucose as your sugar levels begin to drop between meals. It also triggers the processes of “gluconeogenesis” and lipolysis which trigger the creation of glucose from stored protein and fat. Glucagon has some amazing effects on the human body beyond maintaining blood sugar levels and increasing fat burning, including decreasing the production of cholesterol, and increasing the release of extra fluids from the body.

There are enough carbohydrates stored in your liver in the form of glycogen to last 24 hours, unless you are engaging in extreme exercise like marathons or triathlons, so when things are functioning well, there are no blood sugar dips between meals.

Snacking Between Meals:  A Dangerous Habit?

Snacking between meals causes insulin to rise again (before it’s returned to normal), suppresses glucagon, and raises leptin levels unnaturally — leading to a condition called leptin resistance wherein the brain and pancreas no longer hear the signal from leptin to turn off appetite and reduce insulin secretion.

Constantly elevated levels of insulin from snacking between meals, deliberately planning meals close together, or eating foods high in sugar and simple carbohydrates, causes hyperinsulinemia, a condition of too much insulin in your blood. This condition leads to insulin resistance as the cells can no longer take in so much sugar and “close their ears” to the insulin signal. As result, more fat storage occurs and you feel tired all the time.

Insulin resistance leads to weight gain, especially around the middle, stiffening of your arteries, elevated blood pressure, systemic inflammation, and eventually to cardiovascular disease like heart attack and stroke.

The period in between meals should be an opportunity for your liver to exercise and clear out glycogen. Eating between means alters powerful hormonal signals, interferes with the mechanism that burns fat as fuel, clogs liver metabolism, and sends calories right to fat stores.

If you consistently snack between meals or eat again too soon after the previous meal, your liver’s exercise routine is blocked.   When your liver doesn’t get enough exercise, it can synthesize excessive cholesterol, leading to elevated blood lipids even if the food you eat contains no cholesterol. Fat burning is inhibited and calories are stored rather than burned causing food cravings and low energy.

If your muscles are well toned, they will use up fat between meals much faster than untrained muscles.  In fact, muscle tone can provide you with the energy that you need to keep going all day long.

If you consistently eat meals too close together, you’ll also cause your pancreas to fatigue and your hypothalamus and pancreas to become leptin resistant, leading to difficulty shedding excess fat.

If all of this is functioning properly, then after a meal there is no need to eat again for 5 or 6 hours because of the balance of hormones that keeps your blood sugar steady.  The possible exceptions are people with very high metabolic rate, sometimes called fast oxidizers, marathoners and triathletes and growing children who burn through their fuel much more quickly than the average person.

Eating too often also triggers your liver to produce excess VLDL, the most dangerous form of cholesterol. As a result, snacking between meals causes cholesterol to rise, even more than eating cholesterol rich foods.

In summary, this whole process, becomes a vicious, vitality-sabotaging cycle:

According to Dr. Dennis Clark, author of The Belly Fat Book, “The recommendation of eating six small meals per day, to keep the furnace burning hot, has become dogma in some circles. However, the common advice for frequent meals to keep the body’s furnace burning hot makes no sense physiologically or biochemically.”

Dr. Tim Crowe notes that some research suggests that playing around with when you eat may actually cause you to put weight on.  “If feeding time determines the activity of a large number of genes completely independent of the circadian clock, when you eat and fast each day will have a huge impact on your metabolism,” says the study’s leader, Satchidananda (Satchin) Panda, Ph.D., an assistant professor in the Regulatory Biology Laboratory.

Panda points out that the activity of fat-burning genes is highest when you haven’t eaten for a while.  Thus, extending time between meals and not eating after dinner actually turns on liver genes that enhance your ability to lose weight or maintain a healthy weight.

The three meals per day eating pattern becomes more critical for keeping a low body fat percentage as you age, as metabolism slows down.  This can be partly corrected by regular strenuous exercise.

Many children, young adults, bodybuilders, athletes, and fitness trainers can, without apparent consequences, violate the meal spacing required for optimizing fat burning. This is because their demand for calories to aid growth and body repair is very high.

Appropriate meal spacing becomes more important for people after the age of 30 or after intense training stops. In such cases, continued frequent eating will cause a gradual increase in percent body fat. It may show up either as added weight or as loss of muscle in proportion to fat.

Meal frequency has been a topic of research for more than 40 years. Even though modern authors are recommending eating more frequently in spite of the biochemical evidence that fewer meals are more advantageous, there are no studies to support more frequent meals.

Dr. Tim Crowe, a nutrition specialist at Deakin University in Melbourne, says the six-meal-per-day diet is a “faddish dieting trend,” with very little research in support of it.

Meal spacing is a controversial topic.  The popular belief that eating small, frequent meals is best for maintaining blood sugar balance and optimal weight are not supported by the research or the biochemistry.

When you eat small frequent meals, your body is in a constant mode of elevated insulin.  Under high insulin conditions, growth hormone is inhibited and fat burning is turned off.  Frequent eating leads to leptin resistance, insulin resistance, and excess weight. Based on the biochemistry, the spacing between meals that works best is 5-6 hours. Click here for instant access to five videos, each with an action step you can take right away. A 90 minute webinar outlines the steps of a complete 30 day metabolic reset that’ll double your energy, boost your mental clarity, and melt away belly fat.

Get full support HERE for implementing blood sugar balancing strategies to permanently balance your blood sugar so you have the energy, focus and confidence in your appearance to do the things that matter most.

And be sure to post your comments below. Let me know what your experience has been about keeping your blood sugar steady.